50 Years of Experience Working for You

Suffering a serious injury is never easy. At Greenberg & Stein, P.C., we believe that careless and negligent individuals should be held responsible for their actions – that’s why we’re dedicated to providing our clients with the best personal injury representation that we can offer. After an accident, you may be worried about doctor’s bills, hospitalization costs and other expenses. You don’t have to feel alone. At the firm, we are dedicated to helping people like you get the financial compensation they need.

In a large area like Brooklyn, you need a legal representative that stands out form the crowd. With more than 50 years of legal expiring, we have the skill, experience and know-how to help. Additionally, one of our attorneys is a member of the Million Dollar Advocates Forum® and the Multi-Million Dollar Advocates Forum®. As such, he has earned a distinction held by less than 1% of attorneys across the United States. At Greenberg & Stein, we are committed to excellence and believe that our attorneys’ personal achievements are a reflection of the firm’s dedication to high-quality legal advocacy. 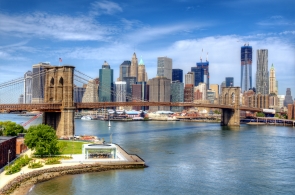 New York City is comprised of five boroughs – Manhattan, The Bronx, Brooklyn, Queens and Staten Island. While Manhattan is the most densely populated of the five, Brooklyn is the most populous. Until 1898, when it was annexed by New York City, Brooklyn was an independent city. Today, it continues to maintain its own, district culture and identity. Many parts of Brooklyn are identifiable by the predominant ethnic groups that live there. The borough’s official motto is Eendraght Maeckt Maght -“Unity Makes Strength.”

Since 1898, Brooklyn has been governed by the New York City Charter. The charter delivers a mayor-council system and is a centralized form of city government. It is responsible for the city’s public education, correctional institutions, library, public safety, recreational facilities, sanitation, welfare and water supply. Additionally, each New York City borough has a Borough President. The Borough President is used to establish balance between the city and the local authorities. The Borough President has significant administrative power and acts as an advocate between the borough and City Council.

At Greenberg & Stein, we are familiar with every type of personal injury case. It doesn’t matter what kind of incident you were
involved in; if someone else’s negligence is responsible for your damages, you may be entitled to money. In New York City, pedestrian accidents are among the top ten causes of accidental deaths in the city. As a pedestrian, you have nothing to protect you from careless or negligent motorists. Since 2011, construction has increased in New York City by 8%. With this increase comes an increase in opportunities for careless construction accidents. If you’ve been hurt on the job because your employer or a co-worker failed to provide a safe and hazard-free work environment, you may be entitled to money for suffering a workplace injury.

If you were hurt on someone else’s property, you may want to consider filing a premises liability suit. Property owners are obligated to provide adequate lighting, safety precautions, etc. on their property. If not, they may be responsible to pay your medical expense and other accident-related costs. Additionally, Greenberg & Stein is ready to stand up for your rights in a dog bite, police misconduct or defective product claim. If you’ve been hurt by doctor who failed to perform his/her duties, contact our office as soon as possible. The sooner we hear from you, the faster we can begin constructing an effective and aggressive strategy to get you the financial compensation you deserve.

Who is Responsible After an Accident Involving Black Ice? Read

Will I Get Compensation If My Car Was Totaled in an Accident? Read

How Do I Know If I Suffered a Brain Injury After an Accident? Read