What can I do if I am hit by a car while walking? 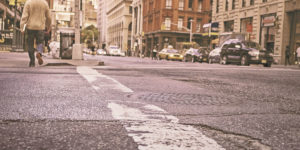 New York City is one of the most pedestrian-friendly places to live in the United States. It is a place where you can live your entire life without needing to own a car due to the ability to walk within your neighborhood or get around via public transportation.

While traveling on foot may be the most common way to get around New York City, it can also be dangerous when drivers or pedestrians don’t follow the rules or act carelessly. According to the New York City Department of Transportation, pedestrians account for nearly half of all motor vehicle accident fatalities in New York City, and they are 10 times more likely to die in an accident than occupants of motor vehicles.

According to statistics by the New York State Department of Motor Vehicles, there were more than 15,000 crashes involving pedestrians in a single year, which lead to nearly 300 pedestrians being killed. As these numbers show, these types of accidents happen all too often, and the consequences of an accident between a vehicle and a pedestrian can be severe. Sadly, many of these accidents could have been avoided.

Distracted driving is the number one cause of accidents between vehicles and pedestrians. While using a cellphone is illegal while driving, as a pedestrian, you should also avoid using your cellphone while walking, especially when crossing the street, which is an all too common sight in New York City.

The second primary factor leading to accidents was due to a driver’s failure to yield in crosswalks or while turning at intersections when a pedestrian has the right of way. The next main contributing factors were speeding and drunk driving.

If you’ve been involved in an accident while walking in New York City, then you may be wondering what to do. The moments immediately following an accident can prove crucial in terms of any potential legal or insurance claims.

First, try to remain calm at the scene of an accident. It’s understandable that you may be inclined to lose your cool but flying into a rage or volleying insults at the driver will not allow you to take stock of the surroundings or help you make the best decisions.

Next, be sure to call the police immediately to report the accident and do not let the driver who hit you leave the scene. It’s a common mistake to think that you can file a report later, and a police accident report will be an important document to have on hand when you file an insurance claim. Some pedestrians involved with an accident, even one that isn’t their fault, will feel shame or embarrassment due to the scene being caused on a busy street and, thinking they haven’t suffered any injuries, will let the driver leave the scene. It is only later, after the shock and adrenaline have worn off, that they find out they’ve broken a wrist or suffered some other injury.

At the scene of the accident you should not forget to collect the driver’s information, along with that of any witnesses. Use your cell phone to take pictures of the scene of the accident from as many angles as possible and be sure to include as much of the surroundings, including street lights, traffic signs, the vehicle(s) involved, and your own injuries. You should then seek out medical attention to fully evaluate the extent of your injuries.

You may feel confident that you can handle the situation on your own, but remember that the driver will be backed up by their insurance company, which has a full legal team and a staff whose aim is to reduce or minimize claims. This is why you need an experienced legal attorney who will fight for you and will help you form a plan of action that will ensure you secure the compensation you need following an accident.

The team at Greenberg & Stein has more than 75 years of combined experience handling all manner of personal injury accidents and lawsuits, including cases involving pedestrians and motor vehicles on busy New York City streets.

Every case is unique and you can be assured that our team will explore every legal option available to ensure that you receive a fair and just compensation if you’ve been hit by a car while walking.

We offer a free consultation and a 24-hour phone line, so don’t hesitate to call us following an accident in New York City. Call us today at 888-411-3966 to schedule your free legal consultation.

WHAT ARE MY RIGHTS AFTER A CONSTRUCTION ACCIDENT? Read